7 of the Most Dangerous Lakes in the World

Lakes are considered nature’s gifts to our planet. Beautiful islands, deep calm waters, sandy beaches, abundant wildlife, picturesque views, and more, are some of the qualities that attract people of all ages to these bodies of freshwater. But what happens when nature’s gifts turn out to be a threat to wildlife and humans?

One of the five Great Lakes of North America, Lake Michigan has the most recorded drownings per year among the Great Lakes. It is famous for massive undercurrents and extremely high water levels that are potentially fatal to anyone who attempts to swim in this lake. Lake Michiganhas an unusual shape that makes it extra prone to deadly rip currents, magnified by the piers and docks. These spontaneous currents carry people far from the shore and are responsible for the loss of many lives each year. Notably, October and November are especially dangerous periods because of the increasing intensity of the current and waves. Despite the dangers, Lake Michigan remains a top vacation spot for many visitors, and the number of deaths keeps increasing every year. 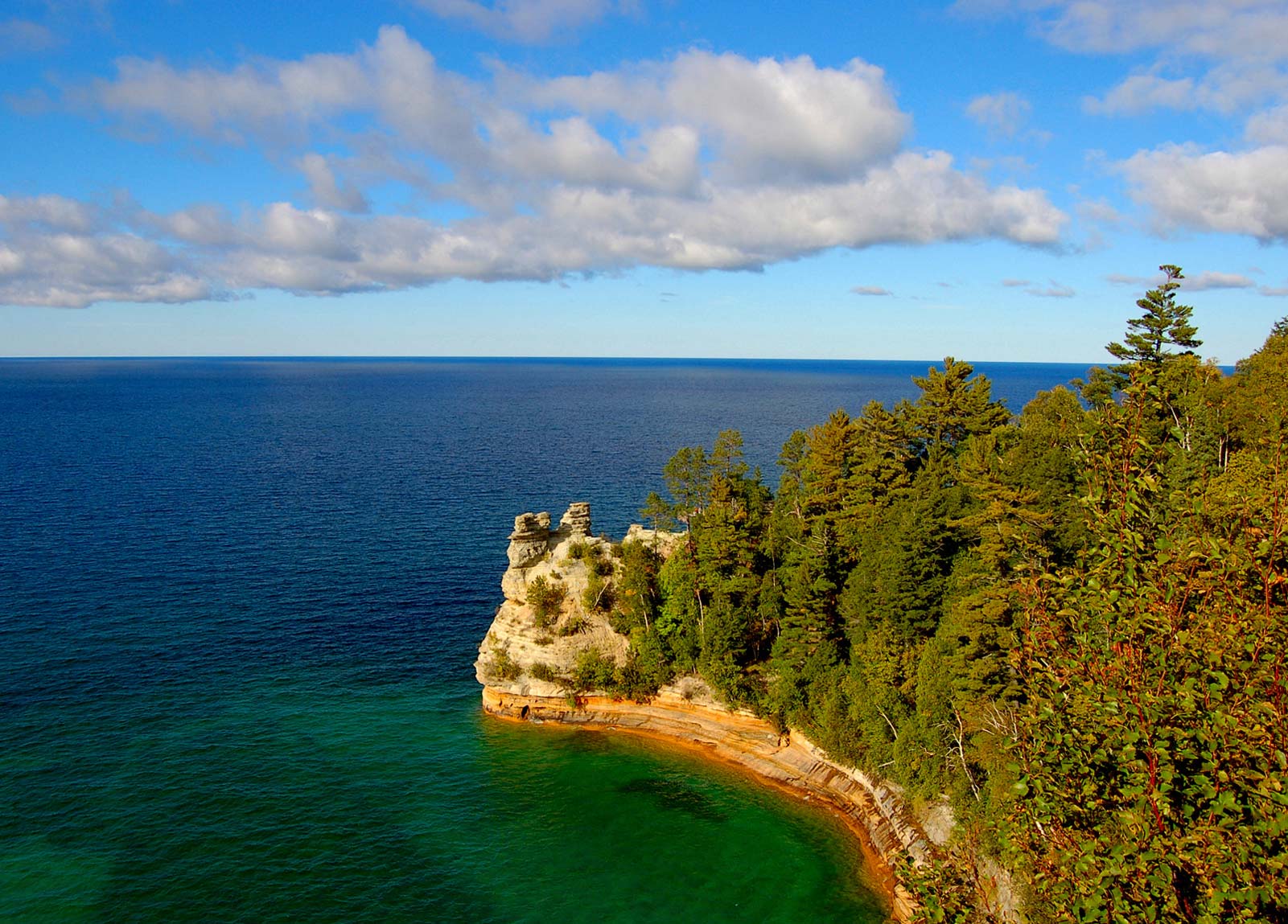 As you might have guessed, this is not a lake you would want to dive into for a swim –yes, it can burn you alive. With bubbling greyish-blue water that is usually enveloped in a cloud of steam, the Boiling Lake located on the Caribbean Island of Dominica looks like a giant pot of water cooking and steaming on a stove. The water temperature along the edges of this lake ranges from 180 to 197 °F (82 to 92 °C). So dangerous that nobody has been able to measure the temperature at the center where the lake is actively boiling. The air around the area is steamy and hot with a sharp, acrid smell of sulfur. 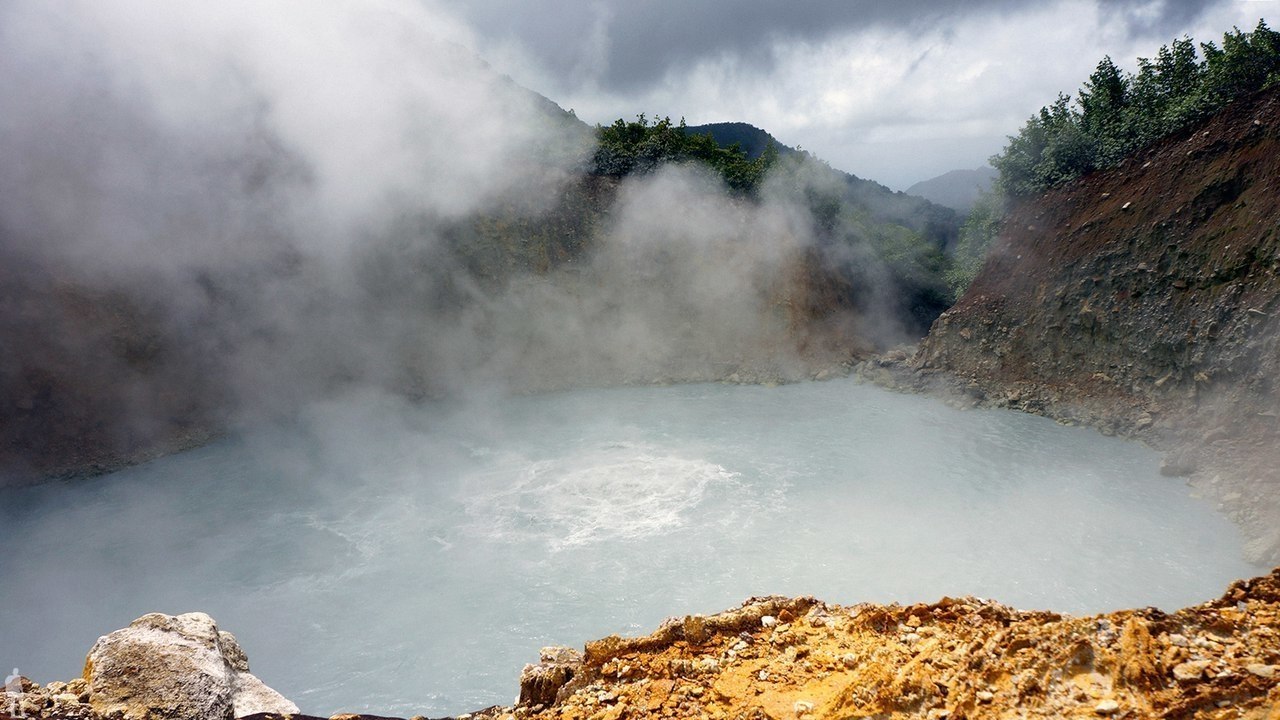 Described as the most polluted spot on Earth by the Worldwatch Institute, Lake Karachay is a small lake located in the southern Ural Mountains in Russia. The pollution of Lake Karachay is linked to the dumping of nuclear materials from Mayak. There’s an estimated 120 million curies of radioactive waste in Lake Karachay! It’s so dangerous that hanging out on the lake for just 30 minutes exposes an individual to a lethal dose of radiation that could lead to death. Even the surrounding areas are so highly contaminated with radioactive waste that people merely standing on the shores of Lake Karachay are not spared from its deadly effect. 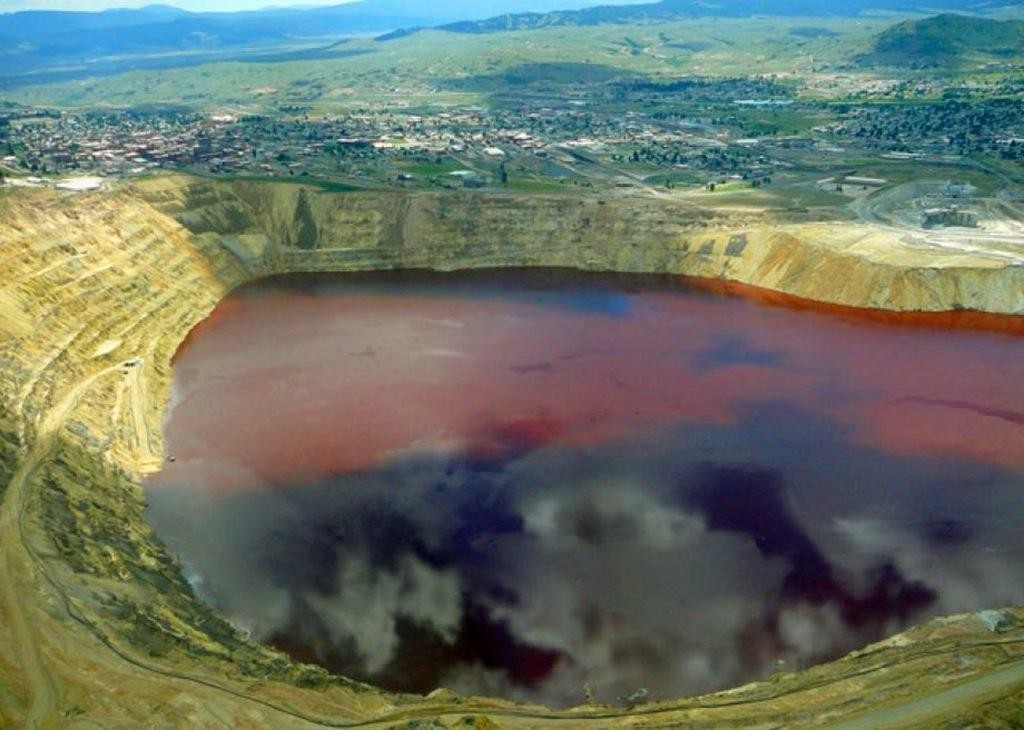 Lake Kivu is the largest lake in Rwanda and the sixth-largest in Africa. Despite its popularity as a top vacation spot for its scenic beauty and breathtaking landscapes, Lake Kivu is a major catastrophe waiting to happen. This lake has the potential to explosively release dangerous gases in a limnic eruption, capable of suffocating all of the inhabitants of the lakeshore. Being the largest of the three deadliest exploding lakes in the world, Lake Kivu holds 16 cubic miles of carbon dioxide and 16 cubic miles of methane at the bottom of the lake. An earthquake or volcanic activity could trigger the release of these dangerous gases, threatening the lives of the 2 million people who live in the lake basin area. 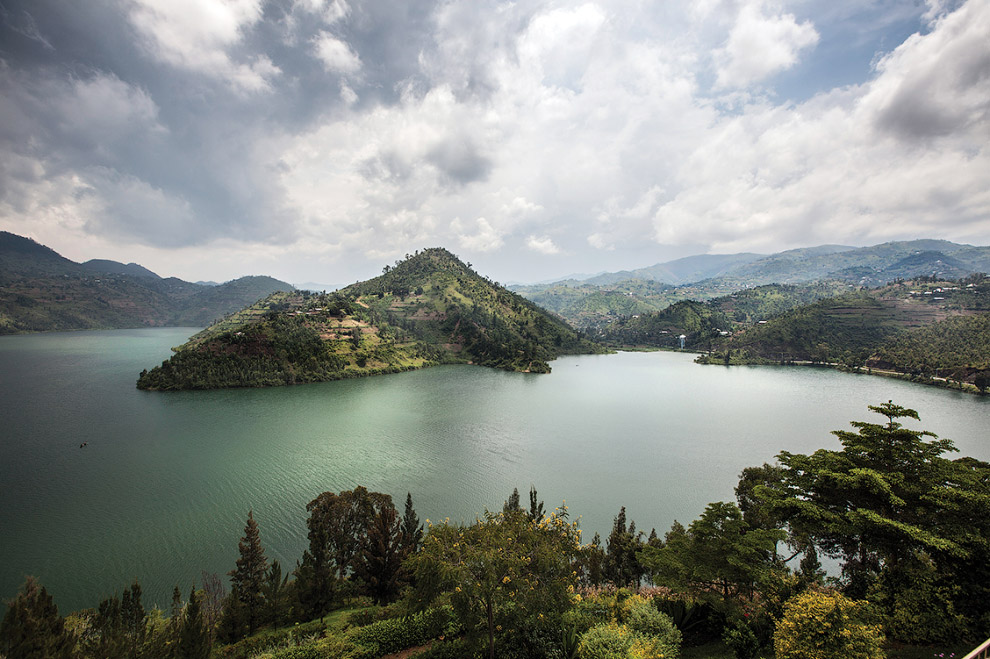 In 1986, Lake Nyos, located in Cameroon, suddenly emitted a large cloud of carbon dioxide which suffocated 1,746 people and 3,500 livestock in nearby towns and villages. This tragedy was recorded as the first large-scale asphyxiation caused by a natural event. Also one of the three lakes prone to explosion, there is a pocket of magma sitting beneath the lake which leaks carbon dioxide into the water, transforming it into carbonic acid. Even though efforts have been made to prevent future disasters, there’s fear that the weakened walls surrounding the lake could collapse soon –allowing the escape of large amounts of carbon dioxide into downstream villages. 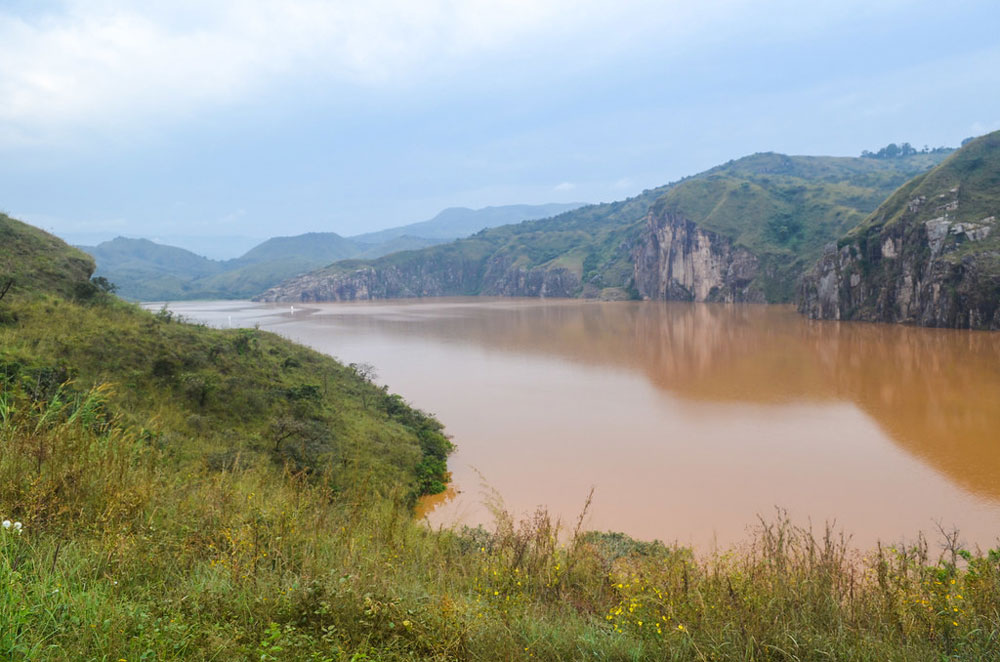 Lake Monoun in Cameroon is the last of the three deadly lakes in the world known to be saturated with carbon dioxide –the others being Lake Nyos and Lake Kivu. This lake exploded in 1984 resulting in the release of a large amount of carbon dioxide which caused the death of 37 people. Like the other exploding lakes, under the right conditions for a limnic eruption, Lake Monoun could cause a lethal fog-like cloud of carbon dioxide –killing everything and everyone in its path! 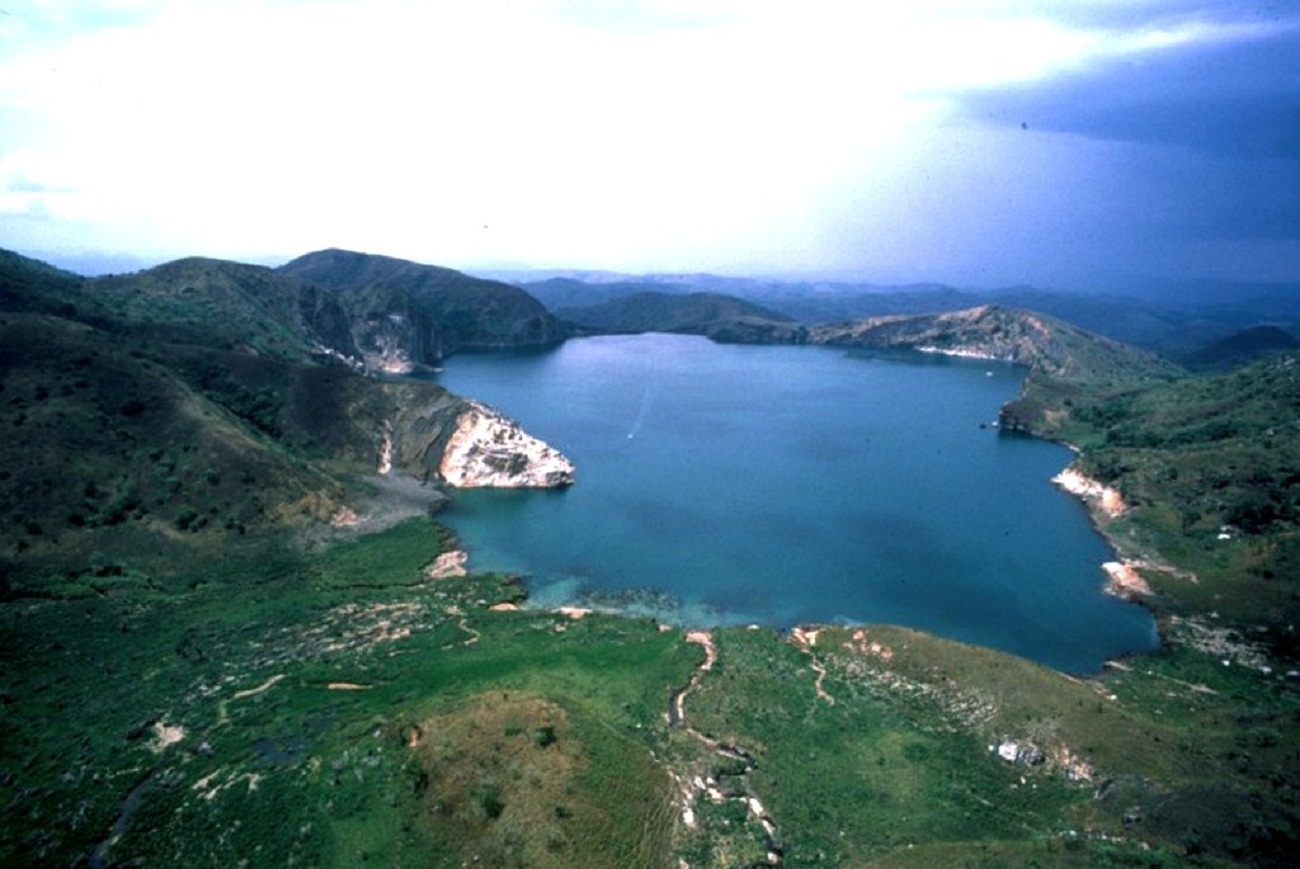 The “lake that turns animals into stone,” Lake Natron in Tanzania is a red water lake with high alkalinity, enough to harden animals and humans into stone. The deep red color of the salt crust over the lake comes from salt-loving cyanobacteria that live there. Coming into contact with the water can burn the skin and eyes because of how caustic it is–nobody would even attempt to swim in this lake. Lake Natron’s alkalinity can reach as high as 12 and there’s a high level of evaporation–similar to ammonia or bleach. Despite the lake’s inhospitable environment for most animals, Lake Natron is the only home to over 2.5 million small flamingos because its caustic saline water supports their survival. 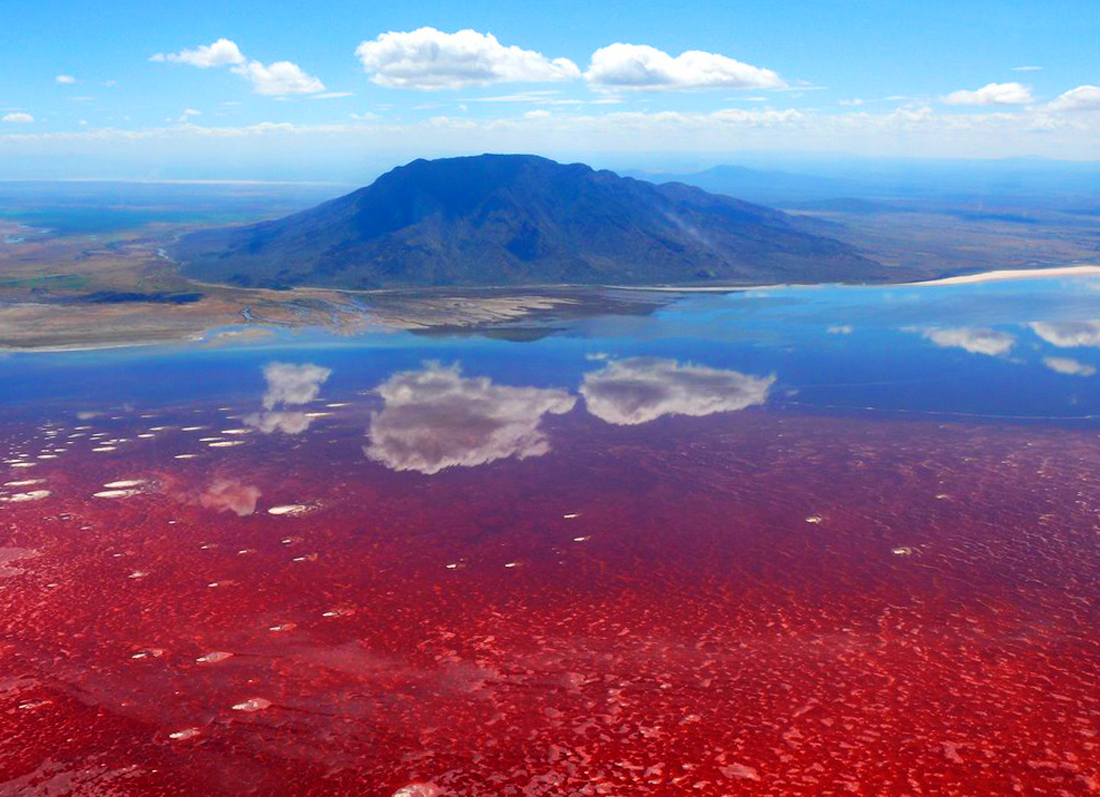