The 7 Largest Man-Made Lakes in the United States

With a total capacity of 28 acre-feet and stretching 112 miles long, Lake Mead tops as the largest man-made lake in the United States. With a deepest point that measures 532 feet and a shoreline that extends up to 759 miles, it also ranks as one of the biggest man-made lakes in the world. Lake Mead is located at the –Nevada border and was formed by the damming of the world-famous Hoover Dam in the Colorado River. Established in 1936, the reservoir was built to provide hydroelectric power, water supply, recreational activities, and a for diverse wildlife. Although Lake Mead is the largest dam in the U.S. based on capacity, it doesn’t usually fill up due to the prolonged drought in Arizona, Nevada, and California. 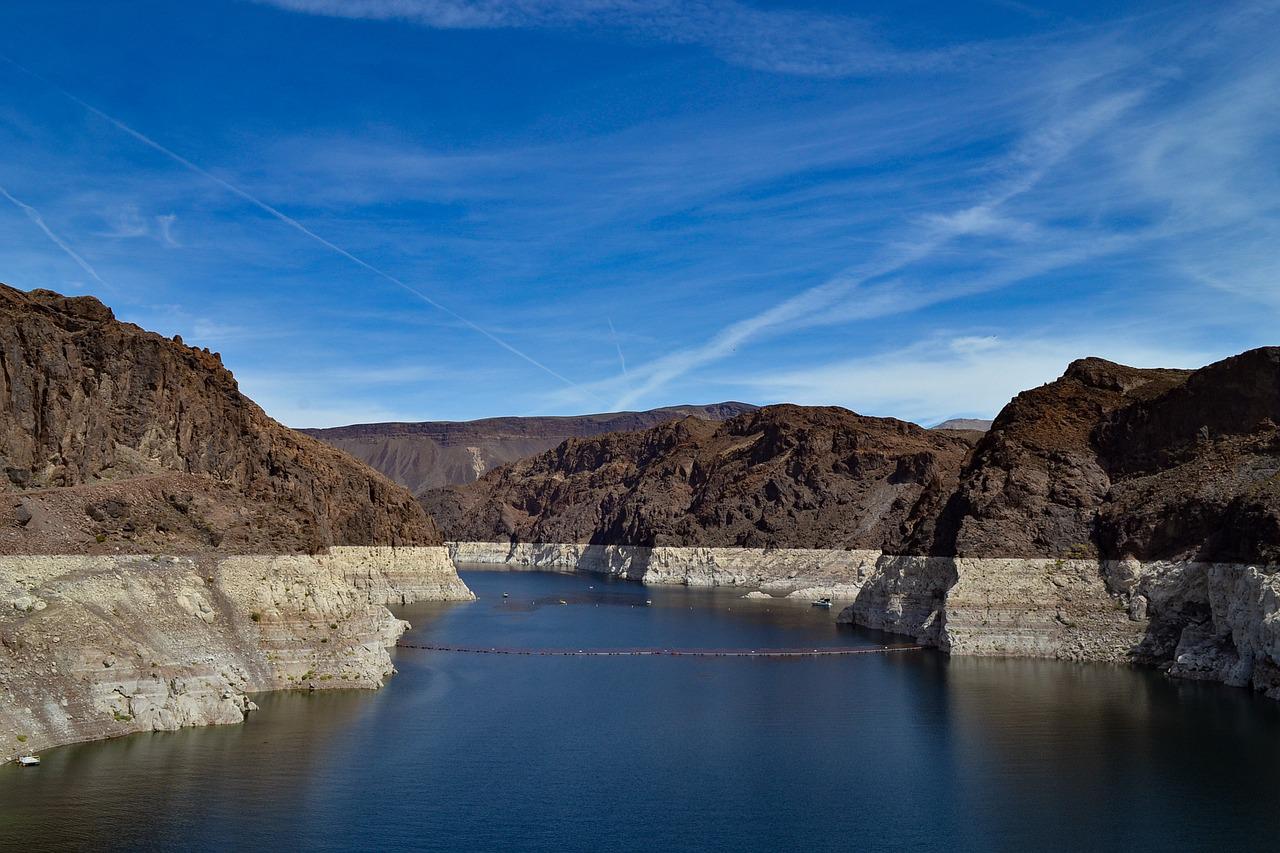 Lake Powell has a total capacity of 26 acre-feet and a total surface area of 161,000 acres, making it the second-largest reservoir in the United States. Apart from providing massive water storage for the American states of Colorado, Utah, Wyoming, and New Mexico, Lake Powell is also well-known for its breathtaking scenery, attracting about two million tourists and visitors every year. Like Lake Mead, Lake Powell was also created by a dam (Glen Canyon Dam) on the Colorado River. It has a maximum depth of 532 feet and is located where the states of Arizona and Utah meet. The water that feeds the reservoir comes from melted snow during the spring months. 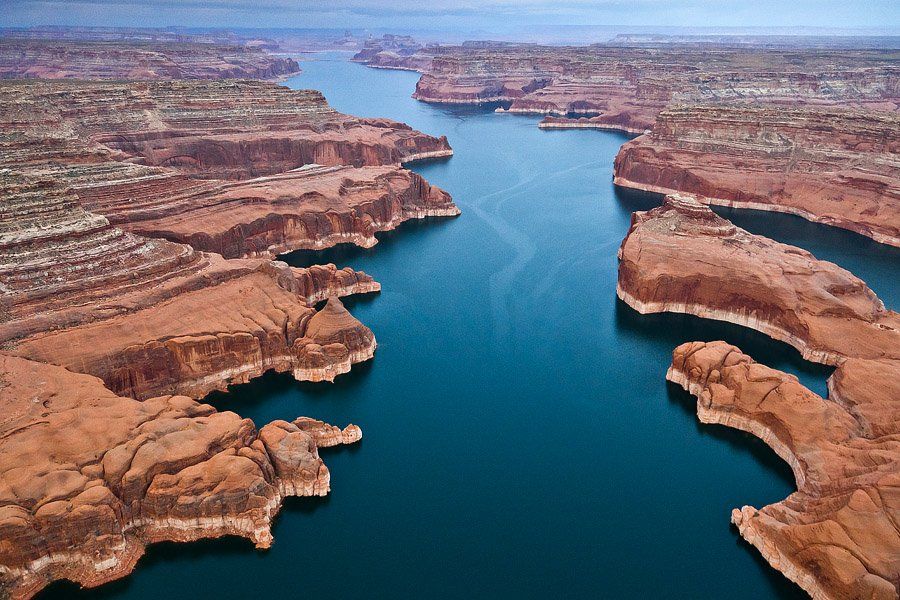 Covering a total surface area of 307,000 acres, Lake Sakakawea in North Dakota has a full capacity of 24 300 000 acre-feet. The lake has a maximum depth of 180 feet and has a shoreline that extends up to 1,320 miles, making it the largest man-made lake in the state of North Dakota and the third-largest in the country. The reservoir was built by the Garrison Dam to host recreational activities such as boating, fishing, and others. Apart from this function, the dam was also created to provide irrigation, navigation, flood control, and hydroelectric power. 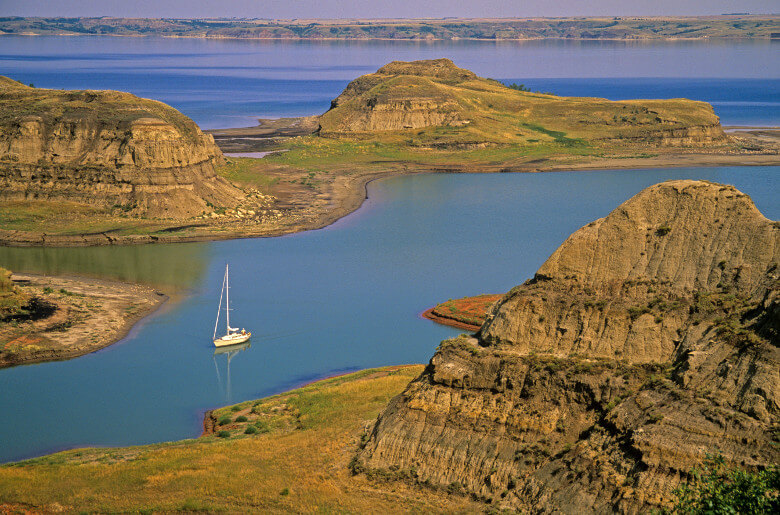 Lake Oahe ranks as the fourth largest man-made lake in the United States, with a total capacity of 23,500,000 acre-feet. It covers a total surface area of 374,000 acres and extends for 231 miles across South Dakota. The reservoir was built to serve as flood control and provide hydroelectric power, irrigation, recreation, navigation benefits, and habitat for diverse wildlife. It was created by the Oahe Dam, which is 245 feet tall and 9,360 feet long and is the fifth largest dam on the planet based on water volume. Lake Oahe may be man-made, but it hosts a rich ecosystem that includes many freshwater fish like walleye, pike, catfish, bass, and salmon. Nearly 1.5 million people visit the reservoir annually. 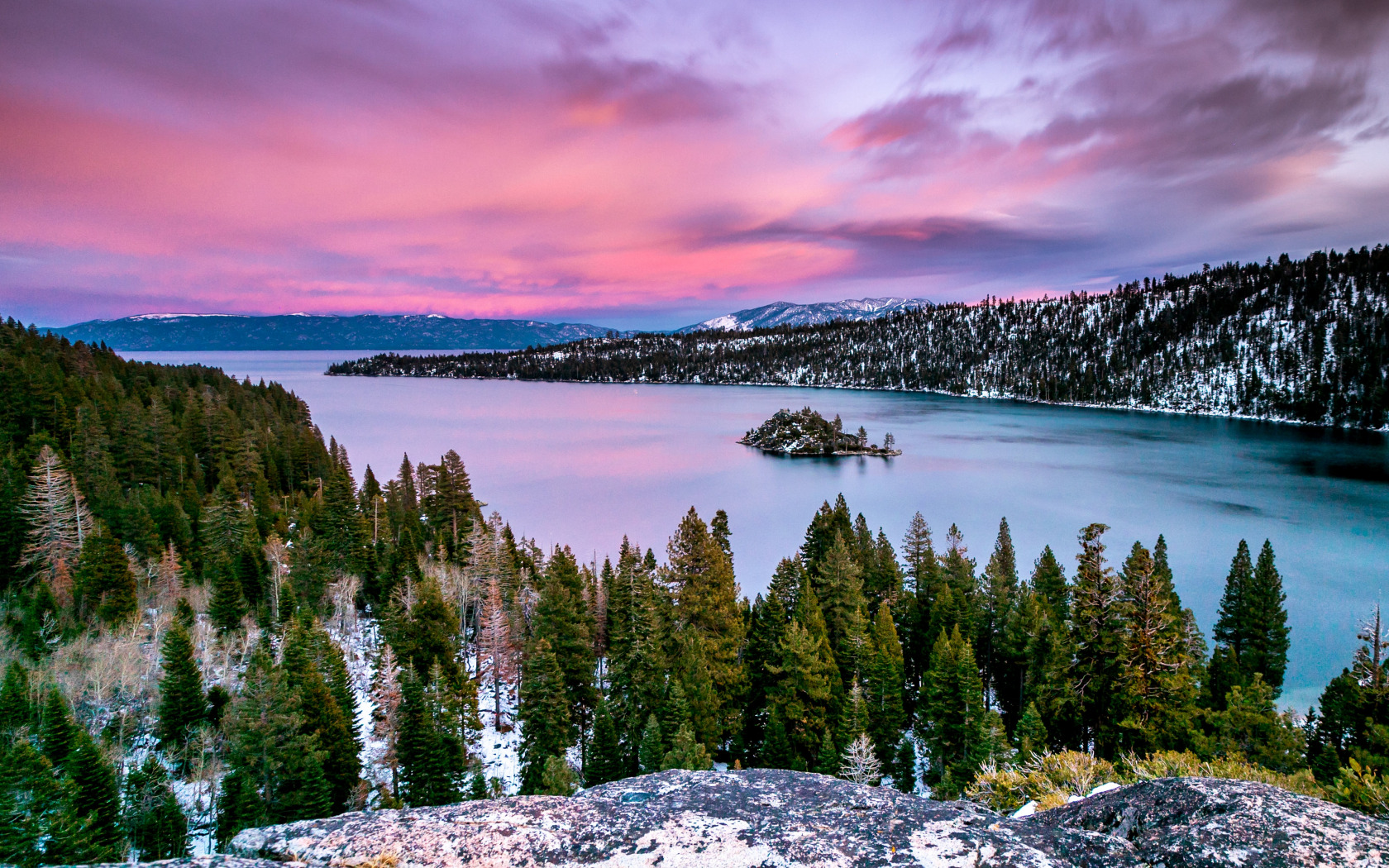 With a total capacity of 19,100,000 acre-feet, Fort Peck Lake ranks as the fifth-largest man-made lake in the United States. Fort Peck is a primary reservoir in Montana, built by the Fort Peck Dam in the Missouri River. It has an extensive shoreline that measures 1,520 miles in length, even longer than the coastline of California. Fort Peck Lake covers an entire surface area of 245,000 acres, and its deepest point measures 220 feet down. Fort Peck Lake was built primarily for flood control, water quality management, and hydroelectric power. Lying inside the Charles M. Russell National Wildlife Refuge, the reservoir also hosts many fish species. 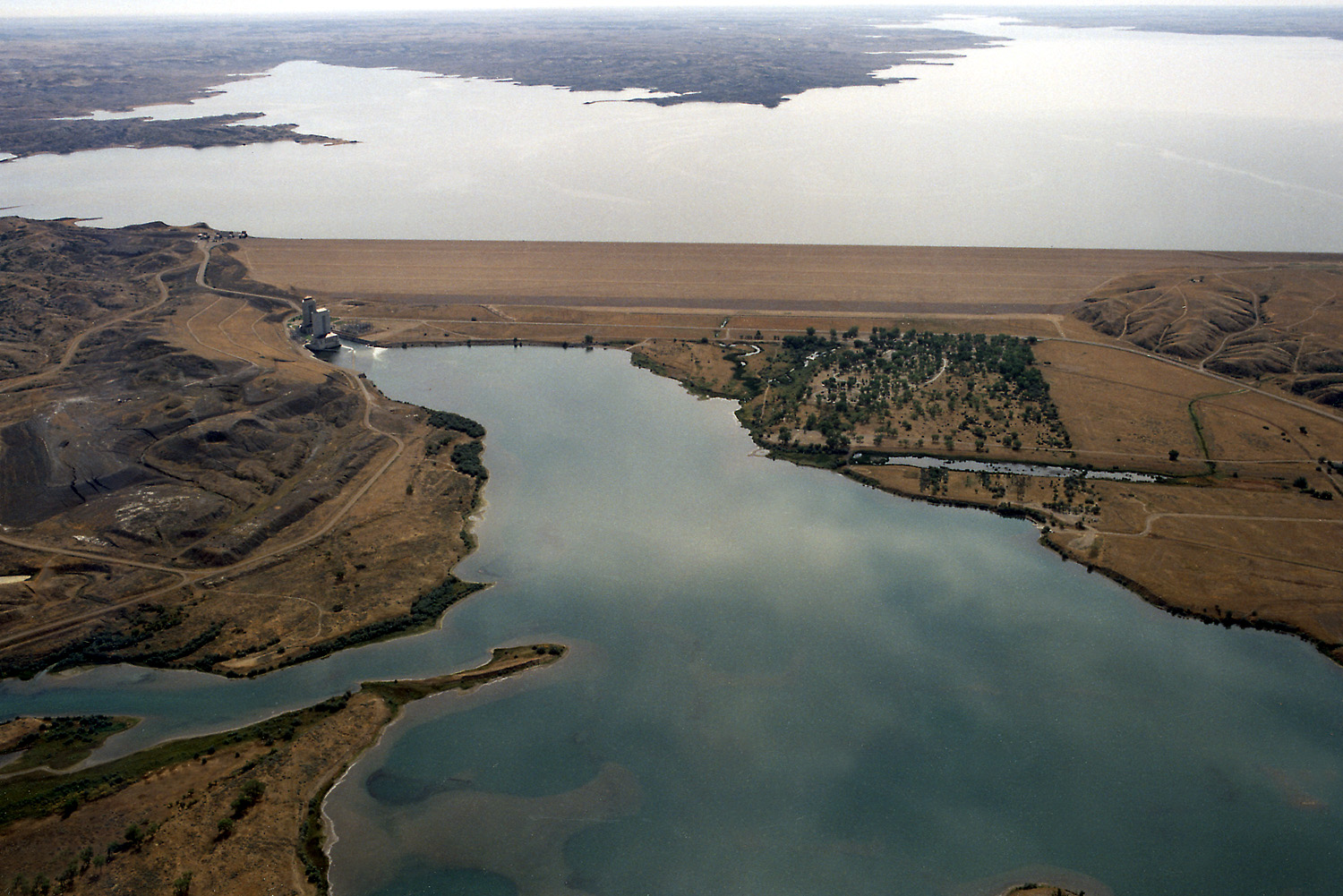 More commonly called the Franklin D. Roosevelt Reservoir, Lake Franklin boasts a total capacity of 9,562,000 acre-feet, making it the sixth-largest man-made lake in the United States. Its wowing volume and surface area make it the largest Washington reservoir, covering 125 square miles. Lake Franklin also has a shoreline that extends over 600 miles and a maximum depth of 46 feet. Its main functions include hydroelectric power, water supply, recreation, and wildlife habitat. Plenty of freshwater fish species can be found in the reservoir, such as the northern pike, largemouth bass, smallmouth bass, walleye, and panfish. The lake was impounded by the Grand Coulee Dam on the Columbia River, constructed between 1933 and 1941. 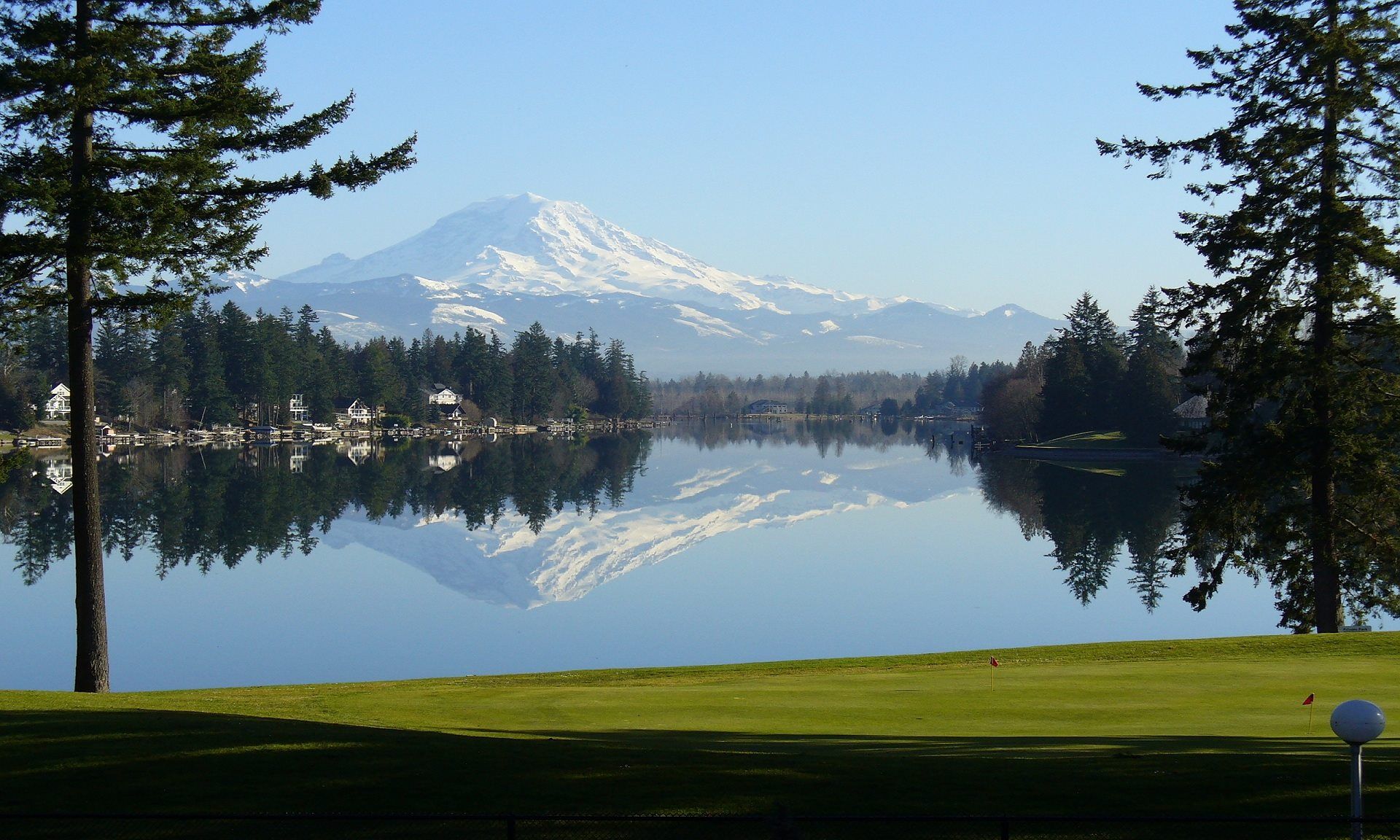 With a total capacity of 6,089,000 acre-feet, Lake Cumberland lands seventh place in the largest man-made lakes in the United States. It also boasts a shoreline that extends 1,225 miles across different counties in Kentucky, namely, Wayne, Russell, Clinton, Pulaski, Laurel, and McCreary. The reservoir covers 65,530 acres or 265 square kilometers of surface area and contains 7.5 cubic kilometers of water, enough to inundate the whole Commonwealth of Kentucky with 3 inches or 76 mm of water. Lake Cumberland was originally constructed for flood control and hydroelectric power production. Over the years, the reservoir has been a primary source of tourism and has become an economic engine for the area. It was formed by the Wolf Creek Dam on the Cumberland River. 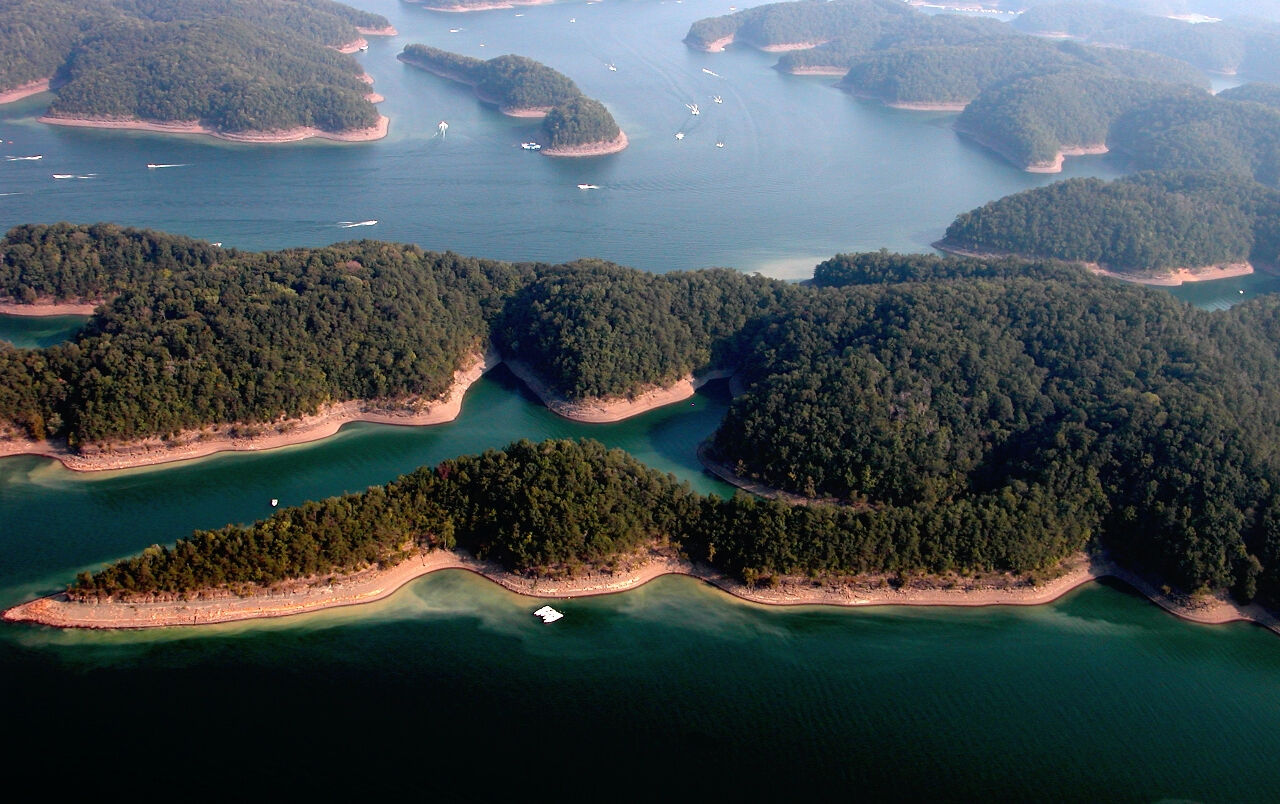